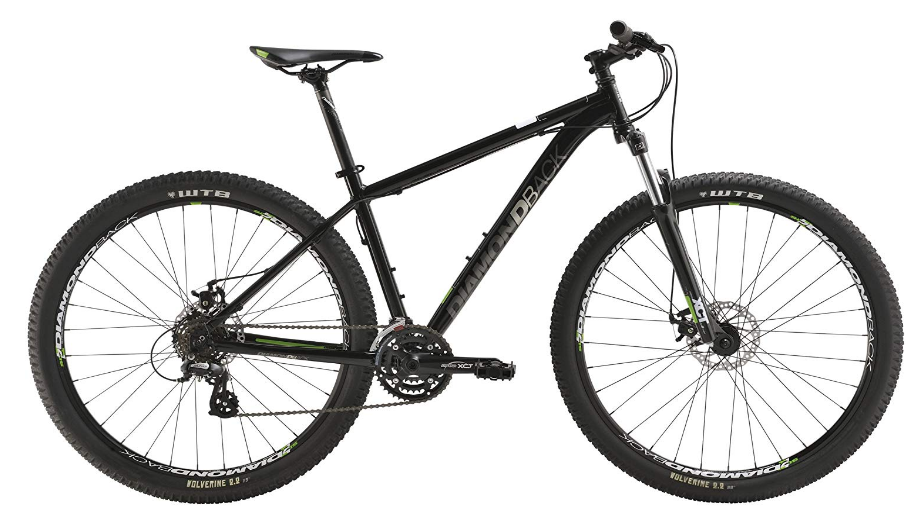 Update: This bike is currently unavailable on Amazon, but here are some great alternatives.

If you're looking to get into mountain biking and need a reliable bike on a budget, you've likely already discovered the often-confusing market of entry-level mountain bikes. Diamondback's Response XE is a somewhat non-classic addition to this growing market.

As far as beginner bikes go, this one is a hodgepodge of high-end and lower-end features, but that isn't something that necessarily stops it from being a great ride for the price. Here's an overview of bike features to help you better understand the Response XE and decide whether it's the right bike for you.

At first glance, the aluminum frame of the Diamondback Response XE may appear as nothing special. It's a sturdy-looking hard-tail that might even be able to pass for a hybrid bike. Most frames come in an attractive but understated black and blue finish, but you can also choose the flashier black and white finish. If you're looking for an especially striking or innovative frame design in your new bike, this isn't it, but it's still a solid option.

With that being said, most people who are just looking for a solid bike to start riding trails on aren't looking for a dazzling work of frame-design genius; they just want something safe and reliable. The Response's frame fits that bill. It's made of aluminium, which most cyclists recognise as a relatively lightweight, yet cost-effective material. For the uninitiated, road and mountain bikes can be made of steel, aluminium, or carbon fibre. Steel is often cheapest, but it's extremely heavy, making it less desirable for riding any kind of distance. Aluminium is a mid-range option. It's lighter than steel, but heavier than carbon fibre, and it is typically much more affordable. Carbon fibre is a strong and lightweight option, but you're unlikely to find affordable bikes made of carbon fibre.

As for sizing, this bike comes in several aluminum frame sizes, making it easier to find one that fits you. You can find the Response XE in 16 inch, 18 inch, 20 inch, and 22-inch sizes.

Moreover, a full suspension tends to make ascents more difficult, since the suspension absorbs some of your pedalling force. This translates to less of your force being used to propel the bike forward. Similarly, since you don't need the extra cushion on a flat surface, a suspension is likely to slow you down when riding on pavement.

Of course, on a hard tail, the suspension you have on the fork matters significantly, and this is an area where the fork on the Diamondback Response XE shines. This bike has a RockShox fork. Rockshox suspensions are usually seen on higher-end bikes, and while the suspension on this one isn't a top of the line Rockshox, it nonetheless has a quick response. You don't want to be stuck riding with a poorly-designed suspension. The fork also has a lockout switch, which you don't often find on budget-minded mountain bikes.

This switch allows you to lock the suspension when pedalling force really matters, like on a steep ascent or on a flat, paved surface. Thus, even though the front fork isn't a high-end, it still includes options that can help even the newest mountain biker develop riding habits that maximise efficiency. From there, you can always upgrade the Response or move on to a different bike if needed.

Just like the fork, the brakes on the Response XE are surprisingly high-end for many intro-level mountain bikes. This bike has Shimano hydraulic disc brakes. Hydraulic brakes tend to need a little more maintenance than cable-operated brakes, but they offer superior stopping power in all types of weather. And if you've ever had to rapidly engage your brakes to avoid hitting a tree or going off an embankment, you know just how crucial the right brakes are when it comes to mountain biking.

Of course, when you have a bike with hydraulic brakes, keeping them maintained is essential--it's a good idea to have the brakes bled and refilled by a professional every six months. If you only ride occasionally, you might be able to change the fluid after a longer period of time.

The shifters and derailleurs on this bike are of similar quality--it comes equipped with Shimano Deore 27-speed shifters and a Deore derailleur as well. Shimano components can be found in the top of the line bicycles, and shifters of this level aren't often seen in mountain bikes that are this affordable. And since shifting components are one of the first things mountain bikers go to upgrade on an entry-level bike, having these components from the start saves you that step.

It's worth mentioning that the gears have a plastic guard--this might be helpful if you're concerned about branches tangling with your chain. Unfortunately, the guard itself is very flimsy, and it's likely to crack if you run into rocks or any trail obstacle with some mass.

In an affordable, beginner-friendly mountain bike, there needs to be some concession in quality to create a bike that's still affordable. Most of these bikes simply include lesser-quality components. But in the case of the Response XE, where components and shocks are fairly high-quality, that concession seems to come in the form of the wheel-set.

Both wheels are Diamondback-made with Quando hubs, and many riders describe them as being somewhat heavy and slow on acceleration. And while the included tires have a deep block tread that can be helpful on especially rugged ascents, the sheer depth of the tread makes the bike more difficult to maneuver when quick turns at high speeds are needed. It would be disingenuous to frame-block tread tires as universally undesirable, though--if you're riding in slippery conditions, these types of treads can help you maintain balance and control.

As we mentioned earlier, though, most mountain bikers make gradual upgrades to their bikes, and a wheel-set upgrade is significantly easier to do than a full component upgrade. Even switching out the tires for something with a little less tread depth may make the bike easier to maneuver, especially if you prefer riding on terrain that isn't especially rough. After all, smooth-rolling tires are easier to ride with over a long distance. But since different riders will have different preferences when it comes to wheels and tires, you may be someone who's more comfortable with the bike's stock tires.

Just as the wheels are a bit of a quality concession, some of the other components are, too. The handlebar and stem perform well but aren't as lightweight as those found on upgraded models.

The seat post is sturdy, but it's steel-clamped, making it something that adds extra weight. Like many bikes, the Response XE also comes with plastic platform pedals. Most riders will likely want to upgrade these, but luckily, that's an easy fix, and even upgraded pedals are likely to be inexpensive.

Whether you aspire to compete or just enjoy taking long recreational rides, bicycle weight matters. And in the case of the Response XE, the bike's overall weight just might get in the way. Despite having an aluminium frame, the Response is surprisingly heavy, weighing in at 33.5 pounds. Newer riders especially may not think of bike weight as being a big deal. And in your first few miles, it may not be. But after several miles of difficult descents and gruelling uphills, that extra frame weight quickly adds up.

However, for many riders, buying a new frame is out of the question (and often defeats the purpose of buying a bike in the first place). But upgrading some of the components may help lower the bike's weight.

Ultimately, the riding experience is the most important consideration when choosing a mountain bike. But if you're like many new to the sport, the most affordable options for purchasing a bike can be bought online, without first taking the bike for a test ride.

Luckily, we can give you a sense of what it's like to ride the Diamondback Response XE. Keep in mind, however, that different people will have different perceptions of bike performance, and that your reaction to the bike may be slightly different than this one.

There's a lot to like about riding this bike. The front fork suspension cushions you from excessive trail bumpiness, and it rebounds impressively quickly for a suspension on a budget bike. And unless you're navigating tough trails with plenty of switchbacks, the handling is good enough for most beginners to start to get the feel of the trail.

As is the case with most Shimano shifters, switching gears is made smooth and easy, which counts when you're rapidly shifting gears over an ascent. And the hydraulic brakes offer great stopping power where it counts. Ultimately, if you're new to mountain biking and looking for a bike that will help you feel secure, the Response XE might be a good choice.

Every mountain bike has its cons. And when considering the downsides of any affordable bike, it's always important to bear in mind that you can't fault a $400 bike for not having all the bells and whistles of a $4,000 model. That said, there are some facets of the riding experience delivered by the Response XE that could stand to be improved.

Many good mountain bikes are described as "nimble"--they can easily be maneuvered over rough terrain, handle brutal descents with finesse, and navigate switchbacks with confidence. But nimble isn't necessarily a word to describe this bike. The heavy wheel-set and large, deep-treaded tires can make riding for any length of time a leg-exhausting affair. And while deep treads offer a grippy advantage in some terrains, they make accelerating inefficient and tiring.

That said, these criticisms don't hold up if you're primarily riding this bike on the road. Some people prefer mountain bikes for commuting or general-purpose riding, And when you're not contending with the trail, the wheels pose much less of an imposition.

As mentioned above, many mountain bike riders enjoy upgrading their bikes as they learn. This has a few advantages--namely, it allows you to learn about bike components while being less expensive than just buying a more expensive bike. And unlike entry-level mountain bikes that just include low-end components all around, the relatively good components of the Response XE make it a prime candidate for mountain bikers looking to increase its quality, piece by piece.

For most bikers, the first part of this bike to upgrade would be the wheels. Given the strong component base and sturdy frame, upgrading to a lighter wheel-set has the potential to make this bike hold its own against many more expensive models. Some riders also note that the stock crankset, while it functions well, is very heavy. An upgrade here also can significantly improve performance.

If you're looking to compete and are primarily concerned with weight, the seat post and handlebars, in particular, can be upgraded to lighter-weight components. Since the Response XE is a heavy bike, switching these for carbon-fiber upgrades is one way to lessen bike weight.

In conclusion, when you take its price into account, this bike is an excellent choice for those just getting into mountain biking, or for road bikers who want to give mountain biking a shot when they need a break. It's also set apart from many beginner bikes due to its quality components. Overall, it's a solid choice for beginner mountain bikers and intermediate riders looking for an affordable choice. And with all of its potential for upgrading, the Diamondback Response XE is a bike that has the potential to grow with you.

Plaidfriday.com is a participant in the Amazon Services LLC Associates Program, an affiliate advertising program designed to provide a means for sites to earn advertising fees by advertising and linking to Amazon.com. Amazon and the Amazon logo are trademarks of Amazon.com, Inc. or its affiliates.